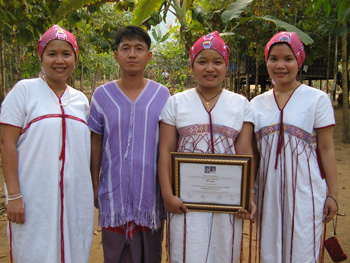 In June 2009 the military dictatorship launched a new military offensive which forced more than 4,000 people to flee into Thailand. The Phan Foundation provided emergency assistance to the refugees.

Cultural Event In The UK

More than 40,000 Karen people are now living outside Burma and Thailand, waiting until it is safe to return home. The Phan Foundation is working with refugee communities to help keep Karen culture alive. With support from the Phan Foundation, the Karen Community Association UK held a succesful cultural event in london in September 2009.

The Phan Foundation has funded emergency food aid to people hiding in the jungle after military offensives by the Burmese Army forced them to flee their homes.

The Phan Foundation works with local organisations who work directly with the people we are assisting. Through them we can ensure help gets to the people who need it quickly and efficiently. Click here to find out more about the organisations we work with.

You can donate online with your credit or debit card in any currency.

This website uses cookies to improve your experience while you navigate through the website. Out of these, the cookies that are categorized as necessary are stored on your browser as they are essential for the working of basic functionalities of the website. We also use third-party cookies that help us analyze and understand how you use this website. These cookies will be stored in your browser only with your consent. You also have the option to opt-out of these cookies. But opting out of some of these cookies may affect your browsing experience.
Necessary Always Enabled

Any cookies that may not be particularly necessary for the website to function and is used specifically to collect user personal data via analytics, ads, other embedded contents are termed as non-necessary cookies. It is mandatory to procure user consent prior to running these cookies on your website.